Between December 2012 and May 2015, in collaboration with two detectives, the police informant Dejan Ornig hacked into e-mails, Facebook profiles, personal forums, search histories and other online communication of individuals, who were deemed suspicious either by him or the police, as indicated in the correspondence between Ornig and the detectives, which we accessed.

On Friday, we were informed by the police that they reported one of the detectives, who collaborated with Ornig, to the Department for Investigation and Prosecution of Public Officials with Special Powers of the Specialised State Prosecutor’s Office, due to the suspicion of a criminal offense. One of the involved detectives refused to comment on the content of the correspondence, but confirmed its authenticity. The other detective is not making any statements.

Ornig sent the detectives the information about the individuals, whose online communication he hacked into: their names, telephone numbers, e-mail addresses, Facebook profiles, as well as the contents of their Facebook and e-mail correspondence. Through these intrusions, he intercepted the communication of individuals, who were suspected by him or by the police to be involved in different criminal activities or be members of various extremist groups. The correspondence also shows that the detectives instructed Ornig, which people to “check on”.

Since the police did not obtain court orders for these invasions, but, judging by the correspondence, acted on its own accord in cooperation with Ornig, it seriously violated the constitutional and legal provisions on privacy of communication of Slovenian citizens. According to Article 37 of the Slovenian Constitution, the police is allowed to obtain this information only through a court order. For this reason, all the information on suspected criminal activity, obtained by Ornig through hacking, is inadmissible in court. Ornig gave the information about his hacking activities to the Specialised state prosecutor’s office at the end of March of this year.

The two detectives also gave Ornig the usernames and e-mail addresses for Ornig to check on. As is evident from the correspondence between Ornig and the detectives, they forwarded personal information about suspected individuals to Ornig, which Ornig needed in order to break into their systems, for example to guess their passwords and security questions on Facebook or Gmail.

Ornig, who is known to the public as the whistleblower on the security vulnerabilities of the police communication system Tetra, admitted to have hacked the online communication of over 300 people during the time of his cooperation with the detectives, between December 2012 and May of last year. He estimates that at least one-fifth of them had not been involved in criminal activity. He only broke into their communication to get necessary data for hacking into the communication of their colleagues, which either he or the police deemed suspicious.

By hacking into Facebook profiles and downloading information about Facebook friends, Ornig admitted to have acquired several thousands of personal data (telephone numbers, email addresses) of people, which were connected to suspected individuals. Although the majority of these people most likely were not involved in criminal acts, Ornig still forwarded their information to the police.

As is clear from the correspondence, Ornig cooperated with the detective Klemen Radetič from the Department of Operational Analytics of the Ljubljana Police Directorate until September 2014. After Radetič left the department, he started cooperating with another police officer from the said department, detective Mitja Mišigoj. The cooperation with the latter, which ended in May of last year, was described by Dejan Ornig as the most intense. The data he acquired through hacking was supposedly so big, he had to deliver it to Mišigoj on a USB stick. During that time, Ornig estimates to have gathered over 100 MB of photographs, communication transcripts and other sensitive data about the suspected individuals.

Ornig and the two detectives mostly communicated through personal emails. In some cases, the detectives replied to Ornig from their official police email address, ending in policija.si. The correspondence also shows the detectives knew how Ornig acquired this data. In several messages, Ornig describes, how he hacked into the online communication of individuals. In some cases, the detectives later asked Ornig for additional information about these individuals or forwarded him lists of email addresses and usernames of the people Ornig should investigate.

In several telephone conversations with podcrto.si, the former detective Klemen Radetič claimed to know nothing about Ornig’s invasion of online communication. He did confirm the authenticity of his correspondence with Ornig via his personal Gmail account. After we told him that in said correspondence, Ornig describes how he hacked into online communication of suspects and that it clearly shows, how Radetič gave sensitive data on suspicious individuals to Ornig, who needed it for his hacking, Radetič refused to comment any further. He explained that his collaboration with Ornig is a concern of the police force, which he had left, so we should turn to them for questions. He claimed, however, he did not cooperate with Ornig on his own accord and that the police knew about his collaboration and had it “all written down”.

The police confirmed that the Justice Minister Goran Klemenčič informed Marjan Fank about Ornig’s actions in February of this year. We actually asked Klemenčič through a third party about his unofficial opinion on Ornig’s doings. According to the police, Klemenčič told Fank that “a specific person (Dejan Ornig, AN) is spreading information in a certain group of people, about being an informant for the police and that their allegedly unlawful behaviour is the result of cooperation with the police and the instructions from the detectives”.

The police informed us last Tuesday that at that time Fank “ordered professional supervision over the work of the units that deal with criminal intelligence work at the Ljubljana Police Directorate and the Criminal Police Directorate. The supervision did not confirm the information that the detective gave orders for hacking, it did, however, indicate inappropriate e-mail correspondence between a detective and a specific person (Dejan Ornig, NA). The supervision also showed that the detective repeatedly warned the specific person against committing a criminal offense and has suspended the collaboration after finding out the specific person had been allegedly involved in other illegal activities”. The police also stated the following: “For the case that you are mentioning, the police do not have the specific information about the specific person hacking into online communication under the order of a certain detective.”

The correspondence, which we analysed, does not show that either of the detectives ever warned Ornig “against committing a criminal offense”. Such warnings cannot be found even in places, where Ornig describes, how he acquires individual data.

Last Friday, after our follow-up questions and the insight into a part of the correspondence between Ornig and the detective Mitja Mišigoj, the police informed us that “after confirming the grounds for suspicion that a police officer committed a criminal offense for which the perpetrator is prosecuted ex officio, they informed the Department for Investigation and Prosecution of Public Officials with Special Powers of the Specialised State Prosecutor’s Office on 10. 6. 2016”.

Last Monday, we asked the detective Mitja Mišigoj through phone calls and e-mails to comment on this issue. As he was unreachable, we sent him the questions through the spokesperson of the Ljubljana Police Directorate. We were then informed by the police that the detective will not respond to our questions.

The correspondence between Ornig and the detectives, which indicates illegal acquisition of information, may cause problems for the police, the prosecution and the courts. Under the fruit of the poisonous tree doctrine, all evidence in legal proceedings that is obtained by the police in an illegal manner and consequently, all the information obtained on the basis of illegal evidence, is inadmissible in court. The most known example of this is the Balkan Warrior case, where some of the accused were acquitted in the first instance, because the police was not able to explain how they got their phone numbers. Consequently, the court also marked the tapes of phone conversations from these numbers as invalid.

Ornig told podcrto.si that he never asked the detectives, how many people were actually charged based on the data, he acquired through hacking, or how many of such court proceedings are still ongoing.

The case of collaboration between Dejan Ornig and the police is yet another example of the problems the police has with obtaining information on the suspects of criminal offenses. At podcrto.si, we already uncovered the unlawful and unconstitutional actions by the police in obtaining information on readers and writers of comments on different Slovenian web portals, at the beginning of 2014. The police obtained IP addresses of readers without court orders, even though the law and the constitution explicitly state that a court order is necessary to obtain any data, connected to (online) communication. Although the police and the Interior Ministry confessed to their unlawful acts at that time, we at podcrto.si, repeatedly caught them in such illegal acquisition of data of readers of web portals, most recently last November. In February this year, the Information Commissioner confirmed our findings and established that the police are continuing to ask portal administrators for data on the readers without court orders. 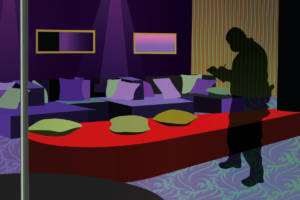 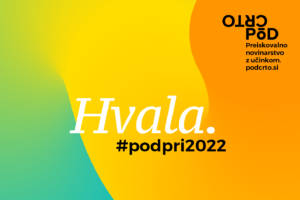 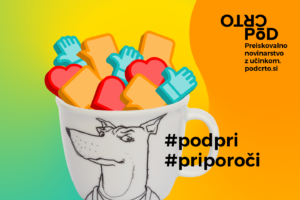